Passed by at the FUSION FESTIVAL last week. You know, generally it takes some days to gather your thoughts after an exhausting experience such as this… many new impressions, new musical and personal acquaintances… let me start by saying, that this was probably the best festival I have ever been to.

Germans know how to organize. Excellent, cheap, all vegetarian food. Logistics that makes sure you can walk anywhere on the festival area in a few minutes – and art exhbitions, food stands, bars and light shows between the stages and DJ floors that make sure you are never bored when moving around. Free toilets everywhere. (If you wanna flush down your shit and wash your hands with soap, you can do that for half a Euro… which felt like a sweet deal in the dirt and sweat of the festival.) Free showers (OK, in the morning and around noon, the line was almost an hour long… but times flies when you are waiting in the sun with the grass and the trees around you… and you are talking to nice people who also enjoy the Basic Channel-techno heard from the nearby dancefloor).

The whole thing was like clockwork. But the thing I found most enjoyable about the whole deal was that the crass commercial spirit, haunting festivals all over the world, had been successfully supressed here. You can take your own drinks when you see the music. No company logos. You can take all the drugs you want to, as long you’re not an asshole about it. No fights. Very few hipsters with too much attitude. In general a very relaxed and friendly atmosphere. And the whole four day festival costs only 55 euros, which, as an example, is about a fourth of the Roskilde festival.

Before going I was familiar with less than a handful of the names in the program. That did not matter, though. Walking around I could hear electronic music all around me at all hours of the day, most of it quality stuff. It is the place for you to discover new names.

The Argentinian Hijo de La Cumbia was very nice, taking a hardcore, junglist approach to Cumbia (a genre that is, as I understand it, to Peru, Bolivia and Northern Argentina what reggae is to Jamaica).

Extrawelt gave us some tight, analog techno that sounded very different (much better, fatter) than what I found with them on youtube. One of the highlights of the festival.

Best of all, as well as an old favorite of us here at Brytburken, was the German dub techno wizard Marko Fürstenberg. He showed the way to a minimal future with a set finely balanced between rich dub bunker pads and sharp, edgy, digital techno rhytmhs. It was well worth to ascend to consciousness at 11 AM to see that. That he played on the outdoor floor pictured below did not make things worse.

For me personally, chip music rarely goes beyond interesting, but this live set from Quarta330 really delivers, going from an opening west coast vibe through traditional gaming style to bouncy house vibes.

Of course, it’s all about supreme taste in electronic funk and acid. They know which classics you prefer better than yourself, plus they give you the news, in a tight, hot package.

Check here first. Then check this out.

Now it’s time for Ceephax Acid Crew live sets (click here and go to bottom of page). Be sure to stop by his homepage which has won many prestigious design awards. 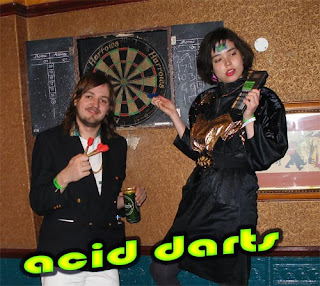