I hope Lord Finesse gets every last penny he’s suing Mac Miller for.

Nothing wrong with jacking an instrumental for a mixtape song or whatever, producers generally have no problems with that, but…

1. If I understood it correctly – I have, naturally, wasted no time listening to college dork’s music – he used Finesse’s classic instrumental for a career launching single and video, meaning there are many corporate dollars are involved.

2. Lord Finesse is the most underrated rapper and producer in history. Few, if any, have surpassed him artistically, and rappers and producers still eat of the style that he invented twenty years ago. But I believe his financial compensation for his monumental contributions to popular culture has been relatively small. 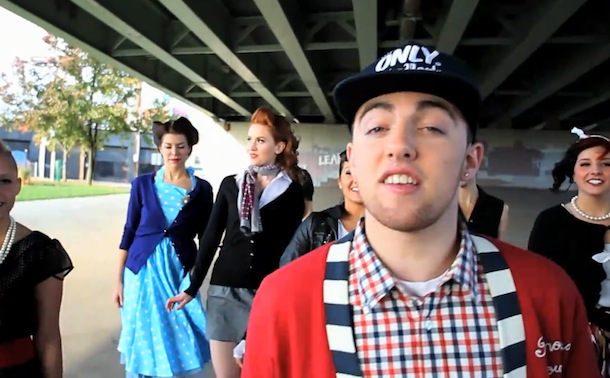 I feel sort of the same way for Mr Muthafuckin Exquire using Necro’s Scumbags instrumental for Huzzah. But…

1. Huzzah is not quite as offensive to my ears (the remix is, though). Exquire is a good rapper and likeable, but nothing special if you put him next to the nineties giants he emulates. His success has less to do with his music and more to do with New Yorkers doing the same type of music having zero personality and charisma… and it’s been that way for years and years. And New York is still Hip Hop’s corporate stronghold, which means that lesser talents like Exquire, Action Bronson, and yeah, ASAP Rocky, still has a big advantage over artists from other states.

2. It seems like Huzzah was recorded and put out for fun. But since it became his breakout record, leading to a deal with Universal, Necro should definitely see some of that money.

3. 90 % of people hating on Necro are nerds, hating him since he reminds them of the bully who beat them up in high school. Black rappers cut from the same cloth are OK, though, since they’re viewed as exotic or something. Whatever, Necro still gets his props from Premier, Evil Dee, Buckshot, M.O.P., Raekwon, Kool G Rap, and so on.

I don’t listen to him much these days, and I can understand if you don’t like his subject matter, and his flow can be a bit forced, but he definitely has his moments. Plus he and his brother made the word goon popular way before everybody else.

And as a producer? He provided the planet with that incredible, gritty New York sound years after others ran out of steam. He should get millions of dollars for that alone. Lord Finesse is forever on a whole other level, but on the other hand, has not released music like this in a long time:

6 Responses to “Should Necro should pull a Lord Finesse now?”