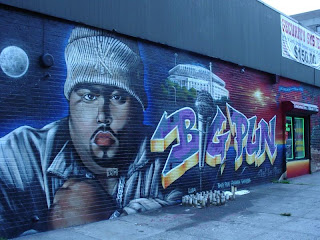 Watching Flow TV’s special on Big Pun got me listening to his classics again.

Big Pun was mad charismatic, made better battle raps than anybody, managed to pull of some OK club songs, penned introspective and relationship songs without making a fool of himself, narrated great storytelling tracks, and even dropped powerful political comments. And he was the illest lyrcially, ever. He seperated himself from other technical monsters, such as Canibus, by always keeping the multisyllable madness, the scientific, hyper futuristic lingo deep within the pain and struggles of his everyday life. It is there for a reason, not for just for showing off.

Let us look at often quoted rhyme from his first album. Being in need of money, Fat Joe and Big Pun have agreed to do a quick job for the mob. Everything seemed to go be going well, but soon they will discover something about the people they left “dead in the middle of Little Italy”:

“Little did we know we riddled two middle men who didn’t know diddily”.

With that language-stretching syllable-fest he establishes the scene, introduces two minor characters, tells us what happened to them, and what went wrong. I’m not saying he was the greatest ever. But had he been able to carry his weight and record a catalouge as deep as those of Scarface, Cormega, Ice-T, KRS-ONE, Tupac Shakur, Kool G Rap or Rakim, he might have been just that.

At times Big Pun preferred to spit that undilluted street venom so very few artists are capable of producing these days. Besides being the most technical, he was also one of the most hardcore rappers ever. Proof below; Pun at his rawest, ugliest, at his most obnoxious and ignorant.